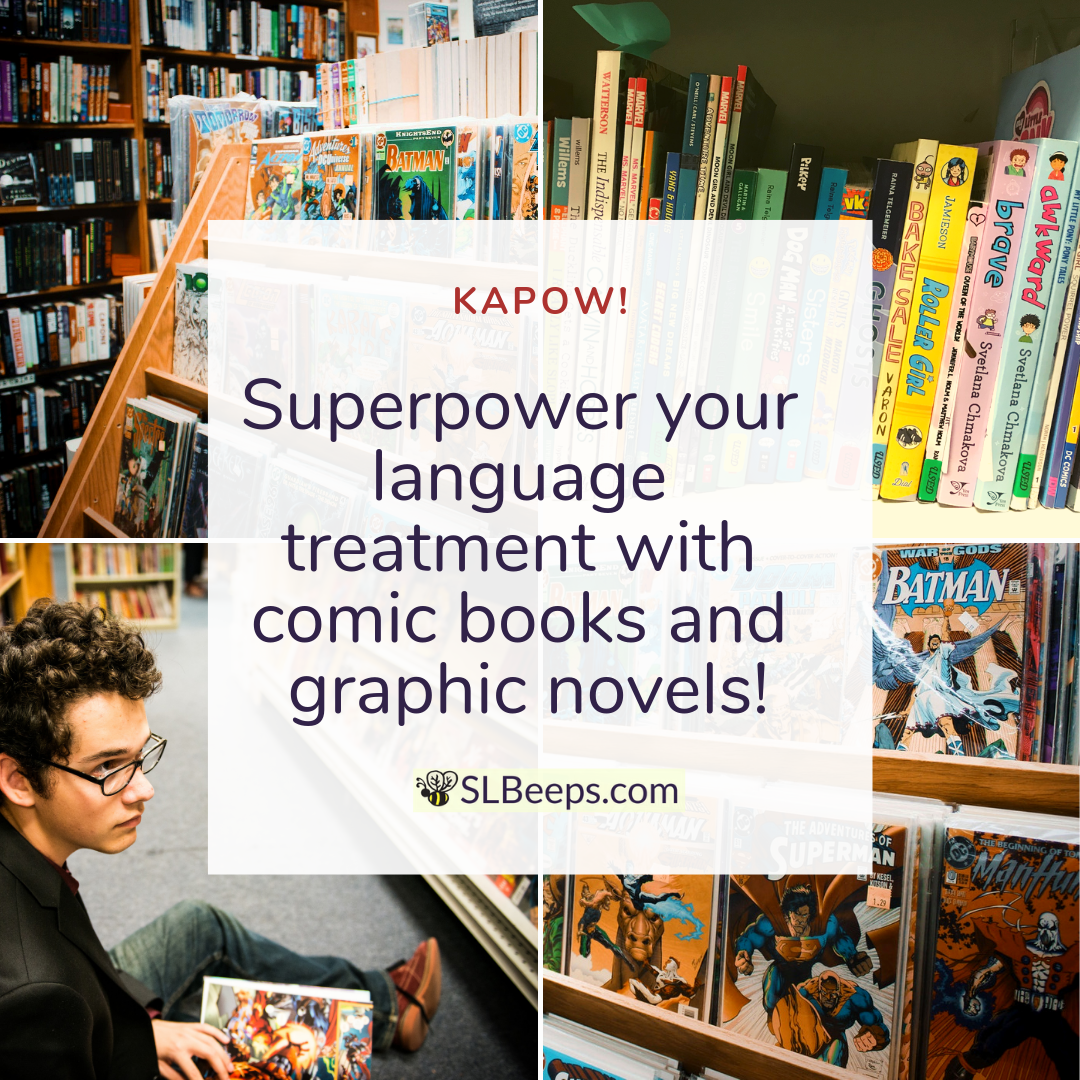 Click here to see a PDF of our ASHA 18 poster on using comics and graphic novels presented November 17, 2018, at the American Speech-Language-Hearing Association Convention in Boston.  If you’d like to know more about the materials being referred to in the poster, click here to see the references on the ASHA18 page.

Here are my favorite comic books/graphic narratives that I’ve used in treatment, (mostly with middle schoolers on the spectrum, but they have wide appeal).

This middle-grade (ages 8-12) graphic novel has been the stalwart of my collection. It’s about two cats who rescue people wearing a robot dog suit of their own creation.  Their heroic escapades (are narrated by a sentient litterbox. This comedy/sci-fi title has bonafides, with a writer/illustrator team who have credits with Futurama and The Simpsons.  Also remarkable is the racial and ethnic diversity of background characters.

If I’m being honest, this is probably the most requested set of books in my collection right now.    There are many, many traditional comic books as well as trade paperbacks (collected comic books in a sturdier paperback form)  The comics are very much like the show—postive, silly, and all about friendship.  A good entry level comic if you’re familiar with the ponies or your students love them as much as mine.  (Fun fact: male fans of my little pony refer to themselves as Bronies, and loads of boys enjoy these clever books.)

Yes! The same one from when we were kids!  Raina Telgemeier, arguably the best middle-grade graphic novelist working today, has lovingly restored the novels about suburban girls and their adventures in babysitting and friendship. They deal with sometimes serious issues (a beloved grandparent’s stroke, for instance) in age-appropriate ways.

Taking place in the Marvel universe, this is the story of Lunella Lafayette, an African-American NYC tween who happens to be the smartest person in the universe. She fights crime alongside her pet dinosaur and interacts with various x-men and Avengers. She’s prickly and friendless in the “I don’t need you losers!” way of a particular kind of bright kid, and some of my students have identified with her. Some books are rated T for teen, mostly for fistfights.

Squirrel Girl follows Doreen Green, a college student with the powers of a squirrel (strength, leaping, speaks squirrel language) and the catchphrase “eat nuts kick butts!!”  She also has the powers of persuasion; she frequently talks Marvel’s biggest baddies out of their evil schemes.  This series is optimistic and very dense with jokes.  While the content is pretty innocuous (mostly fistfights, again), teenagers will get more out of it than younger kids.

Comics Used in the #ASHA18 Poster!

The poster includes excerpts from the work of two great independent graphic narrative artists. Both very generously gave permission for us to use their work on the ASHA poster.  One is Katie O’Neil, (Strangely Katie online) whose graphic novel Princess Princess (available free online) is about two princesses who learn to rescue themselves as they rescue each other.  The second is Kaeti Vandorn, whose playful but meditative work Call of the Sentinel is still in progress (though the website is down at the time of this writing, she can be found on twitter)